The Zashiki is the term for a tatami mat room. It can be also call Washitsu
In the Heian period (794-1185) when aristocratic residence (shinden-zukuri = aristocratic mansions) were floored with wooden planks, woven straw or rush mats, some with bound edging, and thick mats agedatami (is tatami finished on both sides) that was rising the person a little above the floor level and were used for seating.

With the time the word Zashiki applied to rooms completely covered with straw mats and was used for guests. Therefore, it became a reception room or a guest room. You have also have the “Sukiya-Zukushi” (a noble style house with tea room) and “Shoin-Zukuri” (more elegant styles house) that later came to use not only “Tatami” but also incorporated alcoves (both Tokonoma and Wakidana ) in the Zashiki. Zashiki is composed with:

Tatami made of bundled straw with a surface of woven rushes.

Fusuma is sliding paper doors and their fitting are made by covering both sides of wooden frames with thick Japanese paper. They are decorated with paintings or designs.

Shouji is sliding paper screens and their fitting are made by covering one side of a wooden latticework frame with Japanese paper. 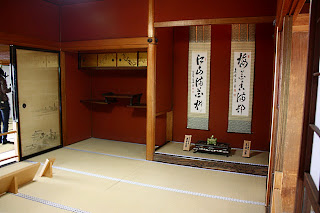 Tokonoma = alcove is a space in a Japanese-style room that is a step higher than the rest of the room and have a wooden floor. Kakejiku, flowers, calligraphy scrolls or paintings are displayed in the Tokonoma.

Tokobashira is the alcove pillar which square pillar or a pillar made of precious wood with gnarls is used.

Chigai-dana is shelves set in a side alcove that has staggered shelf boards.
The side alcove to the Tokonoma is called Wakidoko or Tokowaki.